The great mystery of the Incarnation

Christ’s humanity is the spouse of the Word, the delight and enjoyment of the three divine Persons; a new creation, in which and through which, the most high God himself, becoming Man and forgiving the sin that man had committed against the infinite Holiness, can manifest to us the recondite mysteries of his adorable being, in a song of love.

Oh Christ of mine! what almost infinite nuances You have placed in your humanity, becoming yourself the wonder You sing, through your human voice, the infinite perfections and incomparable secrets of God’s mysterious being.

Oh creation of the human nature of my Christ…! The whole Trinity, in its immutable self-subsistence, is as though in a delirium of infinite love, swift and joyful, bejewelling and bedecking, beautifying and enriching that creature who, coming out of its hands, had to be the most fine lyre through which the very Word of Life would utter his sound of divinity to all the angels and to all men. […]

Oh wonder of ineffable light…! It is the uncreated Light the one that, charging lovingly through the Holy Spirit on Christ’s humanity, bedecked it and made it so beautiful, so beautiful! that the very infinite Word, not being able to restrain himself any longer at the impetuous fire of the Holy Spirit that pushed Him and of the Father Love who sent Him, unites himself hypostatically to that creature that, like a most fine harp, when uniting itself to the Word of the Life, reverberating in it this close and profound union between God and his creature, so closely they merged, that, in the infinitely loving beat of that divine meeting, shaking it in the Holy Spirit, the Word of the Father made it utter his same Voice of divinity throughout the whole of heaven and to all the ends of the earth. […]

What a spiritual marriage with the most holy God himself….! A perfect marriage, in which the common goods are given and returned as an infinite gift of eternal wedding. […]

With what happiness, at the very instant of your creation, you would hear from the Word those words which, engraved in you, did what they said in an eternal utterance, as a donation of a Bridegroom as a wedding gift, words that to you tasted of eternal life, “Everything of mine is yours and everything of yours, that I have given you, is mine!” […]

Day of the Incarnation…! Day of gifts, of feasts, of eternal spousal between the Creator and the creature… […]

What an embrace that of Christ’s humanity with the Word of Life…! What dialogues of love in eternal spousal, burning in the impetuous flames of the Holy Spirit that shrouded it, saturated it and united it to the Word, its Bridegroom…! […]

Heaven now has a Man who is the Word of Life…!

Earth now has, in a Man, the Word of the Father…!

Oh, the moment of the Incarnation…! I see the Man being God and God being Man…! And I cannot explain it…!

I see the total difference of the two natures…! and the union of the two natures in only one Person…! […]; I see God being God, separated at an infinite distance from the human nature of Christ… And that through his intimate, hypostatic union, Christ is God… And I cannot explain it! […]

Oh Christ’s humanity, which are the human nature of the Incarnate Word…! How I see you plunged into the life of the Trinity…! You are the perfect reflection of the most high God himself, immaculate mirror in which the three divine Persons look at themselves and take pleasure in each other.

Oh Christ of mine, I see You immersed into the Divine Family, because, even though I see You at an infinite distance from the Deity in your human nature, by reason of your Person You are God. […]

Thus, the life of Christ on earth was to know, receive, respond to, express and love God, and to adore Him in what He knew and in what remained for Him to know. […]

The Word, infinite Word of the Father, takes his human nature as a sounding board to continue singing to God in Man and to sing to man, as God, his eternal life. A song that He deposited in the bosom of the Church, through Mary, to prolong his mission of telling us his life throughout all ages; a song which the Church, united to Christ, in her Liturgy, turned towards the Father, sings to Him throughout all times; the Church being the one who continues the canticle of Christ to God and to the souls.

Thank you, Mother, for having me curled up in your bosom and for having sustained me with your motherhood so that I might not die when contemplating the great mystery of the Incarnation!

Mother Trinidad de la Santa Madre Iglesia
An extract from the writing: “THE GREAT MYSTERY OF THE INCARNATION” (Collection “Light in the night -The mystery of faith given with loving wisdom”. Booklet n. 3)

Note.- Click here to download the unabridged version of the extract: “The great mystery of the Incarnation”.

He who lives of the Holy Spirit is led to Mary, and She shows him in Her womb the secret of the Incarnation, where the Father speaks His life to man, through His Son, in the maternal virginity of Our Lady. (22-12-74)

The Word Incarnate embraces, in the reality of His two natures, Eternity and time, divinity and humanity, creature and Creator, in such a perfect union that, since He is in Himself Heaven and earth, He has no Person other than the divine. (15-10-74)

In the mystery of the Incarnation all the mysteries of the life of Christ are summed up, because it contains in itself the self-gift of God to man and the grafting of man on God; being that self-gift manifested and consummated through the life, death and resurrection of Christ, according to the Father’s will, under the impulse and love of the Holy Spirit. (12-1-67)

The Incarnation is the loving act of God, full of compassion and infinite mercy, pouring Himself on man in the womb of the Virgin with redemptive will. (27-3-62)

Thank you, Lord, because You became Man and, therefore, You are able to suffer, to die, to rise and, even, to remain for all ages in the Eucharist, prolonging the whole mystery of the self-gift of Your love in the Church through the priesthood. (4-4-75)

Mother Trinidad de la Santa Madre Iglesia is the foundress and president of The Work of the Church.

Mother Trinidad has repeatedly experienced the powerful drive of this command that was instilled by God in her soul at the time of the Council:

'Go with everything to John XXIII, with all to the Pope, the Council is coming for this...' and ever since then she has always been living her daily journey on this earth supporting herself beneath and upon the See of Peter in order to sing the song of the Church and so fill with overflowing joy all of God's people.

Help us if you can 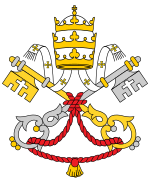